Highly Recommended: The Jihadist Plot — The Untold Story of Al-Qaeda and the Libyan Rebellion

A remarkable development took place in the midst of the 2011 conflict in Libya: the United States and its allies changed sides in the war on terror. 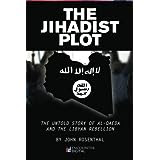 From virtually the very start of the unrest in Libya in mid-February 2011, there were troubling signs that the insurgents, whom the Western media insisted on presenting as peaceful “protestors,” were in fact violent Islamic extremists whose methods bore a clear resemblance to those of al-Qaeda. Indeed, the methods of the rebels—including beheadings and summary group executions by shots to the back of the head—clearly resembled not merely those of al-Qaeda, but of that branch of al-Qaeda that was most notorious for its brutality: namely, Abu Musab al-Zarqawi’s al-Qaeda in Iraq.

The resemblance, as it turns out, was not accidental. Famous for its religious fanaticism, the eastern Libyan heartland of the Libyan rebellion was in fact well-known in counter-terrorism circles as a hotbed of support for al-Zarqawi’s al-Qaeda in Iraq.

… The streets of Benghazi were in fact awash with al-Qaeda flags in the days following Libya’s “liberation.”

From John Rosenthal comes The Jihadist Plot (The Untold Story of Al-Qaeda and the Libyan Rebellion),  which tells you everything that you (and that Hillary Clinton) always wanted to know about Benghazi but never thought to ask — and then some.

John Rosenthal has often been the subject of No Pasarán links along the years, most notably, perhaps, the very opening item on his blog, regarding September 11 (the original 2001 attack, that is): The Legend of the Squandered Sympathy.


“How could this happen? How could this happen in a country we helped liberate, in a city we helped save from destruction?” Thus Secretary of State Hillary Clinton expressed what she supposed was the reaction of many Americans to the September 11, 2012 attacks in Benghazi that left American ambassador to Libya Chris Stevens and three other Americans dead. The questioning and self-doubt showed “just how confounding the world can be,” Clinton observed. But the world is not so confounding when one is correctly informed, and the Benghazi attacks are not so confusing and “senseless” as the Obama administration insists. They are in fact the direct consequence of American policy in supporting the Libyan rebellion against Muammar al-Qaddafi, and they make perfect sense when one knows how thoroughly the rebel forces were affiliated with and inspired by al-Qaeda.

Those same forces proudly fly the al-Qaeda flag to this day. They do so not in secretive “jihadi encampments”—such as those for which drones dispatched by the Obama administration are reportedly searching in Eastern Libya. They do so rather in broad daylight on the main boulevards of Benghazi and other Libyan cities. One does not need drones or sophisticated surveillance technology to find them. Videos of the military parades of the Libyan mujahideen—to use their own preferred terminology—are readily available on local Arabic-language websites and YouTube pages.